so… i first caught wind at serious eats that the mcrib was back.  and it dawned on me that i had heard people joke about the mcrib, i had seen it parodied on the simpsons as the ribwich, but i have never had one.  today en route to see my nieces i stopped by mcdonalds to grab some nuggets (my sister’s three-year-old nephew calls them chicken nuts) and i saw it: “the ribwich mcrib is back!”.  of course i had to try it. 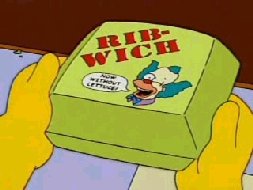 VUrdict: blech.  greasy salty pork patty slathered in unremarkable bbq sauce.  i didn’t even finish it.  mcdonald’s and i have had a tumultuous relationship.  as of now, some days the food is passable (when you’re drunk on a saturday night) and the rest of the days it’s cardboard crap.  i was really hoping that the mcrib could rectify things but alas it was simply another failure among others.

i heart scrabble and tetris. i think about food all day long.
View all posts by savuryandsweet →